A short quide to MARX Civil War figure reproductions. Be careful of ordering the REMARX figures. You can get damaged or "short shot" figures. CLASSIC TOY SOLDIERS own reissues are the best and the best quality.They do carry the 1990s reissues as well. 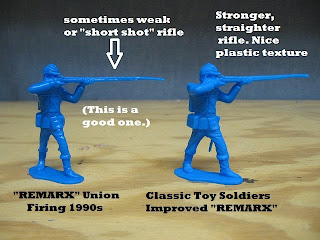 I really like marching poses. I have almost 150 reissue MARX Marching figures. The "REMARX BLUE" is the best color rather than the powder blue the originals came in, or with some reproductions made to match the originals from 1960s. For some reason the Confederates were recast in this "REMARX BLUE" but they make good New York troops in shell jackets or Chasseur units. The blanket roll can be a Union option as well. The Union figures are nice but not very close to authentic wearing boots and a short frock coat. The "shoulder arms" pose is more WW II. When I see MARX's US dismounted cavalry, I see Korean War with Kepis. You might be able to get the Chinese MARX repros in gift shops around Gettysburg for anywhere around 25 cents to 75 cents each. They only made a few poses from the series in a darker blue and gray. 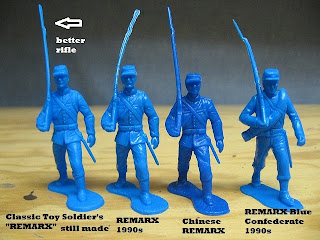 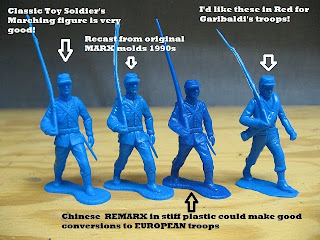