My conversions of Classic Toy Soldier's lancer figures. I made a unit of the helmeted lancers with plastic rod lances and printed pennons from the original figures that have an assortment of Lancers and Cuirassiers.
One unit of Mexican Alamo campaign Light Cavalry had helmets, red tunics, and lances but I bought the blue plastic versions.

I took the figures in tunics w/o breast plates,to make my Lancers. I also used the better horses from IMAX and pinned them to the horses with plastic rod in the figure's seat. This unit is going into battle with their lances still upright which really looks kind of cool! 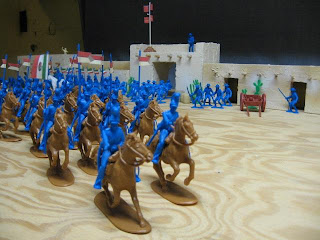 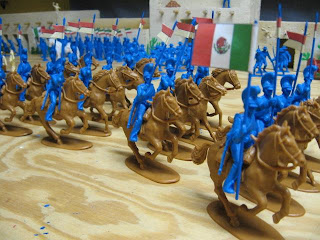 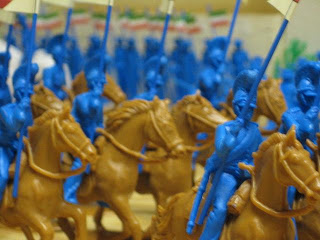 These little guys are "close" to some Napoleonic lancer units and some Mexican units from the Alamo period and the Mexican War so they do duty in a number of ways color coded blue. Because they are plastic it's better for me NOT to paint them as they are stored in plastic shoe boxes and get pushed around on the table a lot.
Posted by Scott B. Lesch at 5:57 PM