"Some of these Chilean vivandieres showed
great nerve and enthusiasm in action. The
handsome and dashing Dolores Rodriguez
proved to be a heroine of the first order.
When she perceived her husband, who was
sergeant, slain on the field over which the
charging Chilean columns had marched,
she hurried to his side, gave him a last
parting embrace, and then, picking up his
rifle and buckling his cartridge belt around
her slender waist as best she could, she
rushed to where the contest was hottest to
avenge her fallen mate. Her life was spared,
and for her pluck, presence of mind, and
great endurance, she was given, per d'hon-
neur, the rank of her fallen husband-ser-
geant."

Misidentified as Peruvian in this period newspaper (unknown) for sale on Ebay. 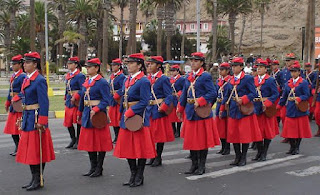 A possible recreation of her outfit in a museum.... 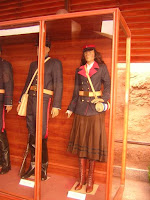 Even a porcelain figure and toy soldier version... 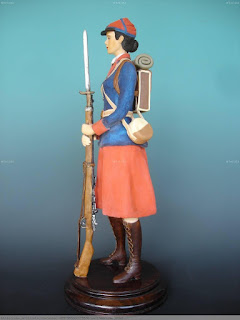 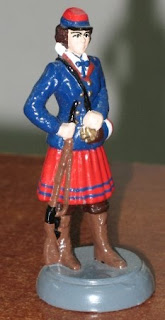 There may have been some confusion back in the 1880s with the Dolores Rodriguez images and the Irene Morales images. 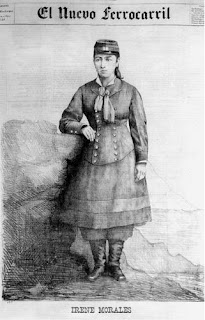