WARNING! Male anatomy humor ahead! There are some nice ladies that look in here from time to time and I warn them ahead of time.

When you look for old military images you can come across this kind of humor......... 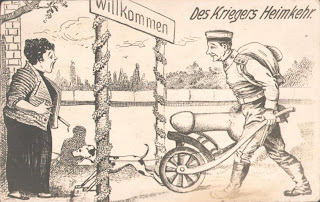 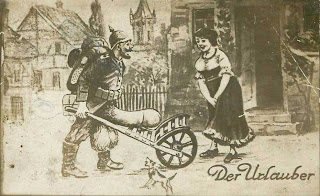 You have consider that 1. Almost 100 years ago two postcard artists thought that this was funny. (one may have copied the other) 2. That these artists thought that OTHER people would think the joke was funny. 3. Their publishers thought OTHER people would pay good money to buy the cards for friends and loved ones who would think it was funny. 4. That those that received these postcards  AND collectors saved them for almost 100 years so that they could be offered for sale again on the "internets."

An after thought is that while "pulling a boner" was a 1930s 40s term for making a mistake, the two soldiers represent the term "boner" that I grew up with. They are actually PUSHING a boner.