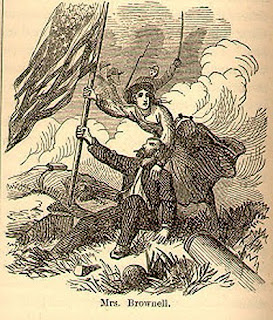 Illustration from a Newspaper story of Kady at New Berne


I've collected a good number of period photos and images of Kady C. Brownell who was the "Daughter Of The Regiment" of the First Rhode Island Detached Militia from April to August 1861.

There's some evidence that she was at The Battle of Bull Run in July 1861 and also at the Battle of New Berne, NC in March 1862. She was with the Fifth Rhode Island Battalion at the time. She and her Husband were home after April 1862 while Robert recovered from his New Berne wound.

Both she and her husband received pensions. 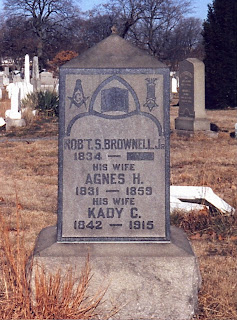 What's interesting here is that Robert's first wife Agnes didn't die in 1859 but moved west with her kids. Kady is buried here, but Robert is in a pauper's grave in Harrisburg PA. The engraving on the right of the grave marker is the Grand Army Of The Republic medal, NOT the Medal of Honor. 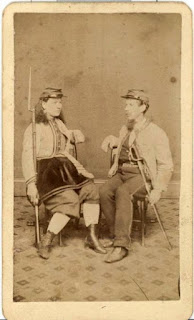 Here Robert and Kady pose for a post-war Grand Army Of the Republic benefit show. 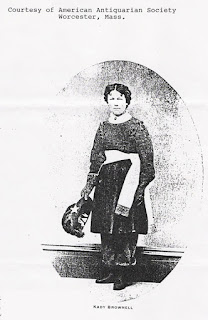 Possibly Kady in 1861 with her hair cut short but parted in the center as women did at time.

Detail from James Walker's painting of the First Rhode Island 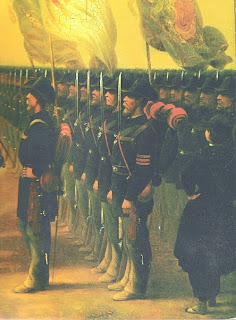 Engraving of Kady from Frank Moore's Women of the War 1866 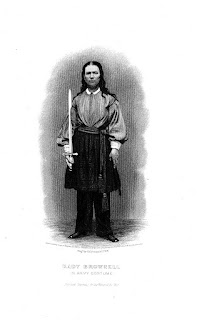 Three views of Kady in her drill costume from 1870
She performed for a GAR benefit show in Bridgeport, Connecticut 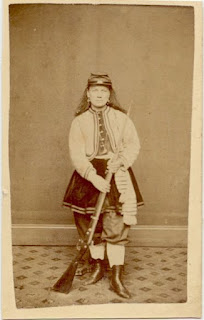 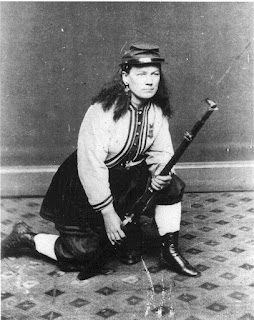 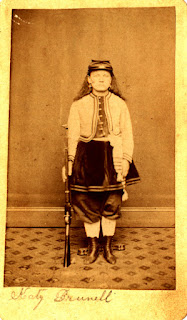 I've been researching Kady on and off for over ten years. There's good evidence that she carried a small United States flag at the Battle of New Berne. The Fifth Rhode Island battalion was too small a unit to have Regimental colors. One of the officers had a small US flag and attached it to a stick. It was handed to Kady as the officers had no colorguard but Kady was sent to the rear when the Battalion went into the fight. Kady served as a nurse in the hospital after New Berne was taken and on the USS Cossack on the way back to New York in April 1862.