A while back I posted a series of  reverse "strip tease"postcards showing an African woman dressing in European clothes.....

A number of photos and postcards have come to hand from this early 1900s era with African women posing in European clothes and undergarments. Some models were prostitutes and post 9/11, it's hard to believe that Muslim North Africa seemed to where one went for sex and for models for erotic photos, but it was true from the number of post cards available of North African nudes in brothels. Of course there was also the "National Geographic" type photos of bare breasted southern African women. Other photos and postcards may just be "fun" with a touch of racism showing African women copying European fashion in a silly way. Now that I've spoiled the fun with modern "guilt" and conscious raising. I have to warn followers that some female nudity can be seen in the following posted images.

The model from my earlier entry.....she's from the Congo 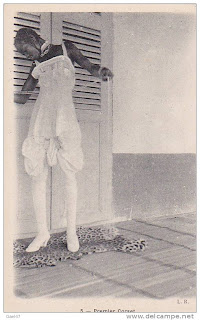 Her unusual head dress and "combinations." 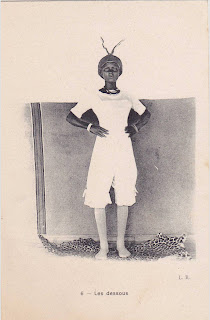 I hope I find a better copy of this photo below. 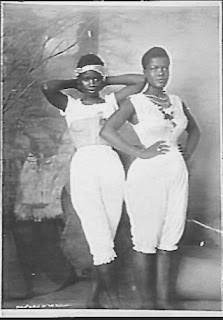 The photo below is a plump women who starts in ethnic dress, then changes to European fashion. 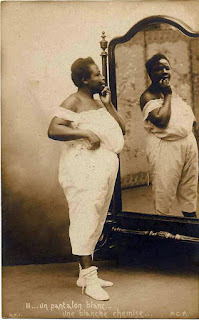 This one is also from a series... 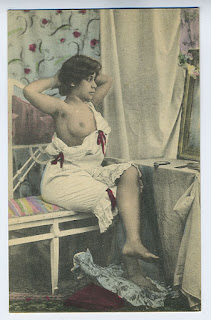 This is a Hova women from Madagascar in 1910. A good number of postcards of Hova women show European outer clothing or clothing made from local cloth in European patterns. 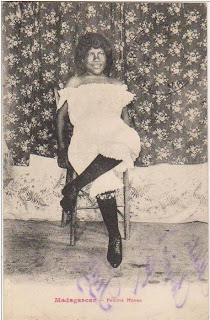 Up to North Africa, a woman wears the European chemise as does the other woman below... 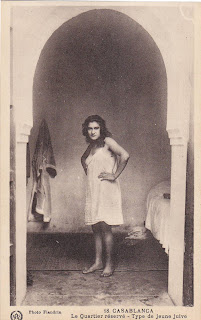 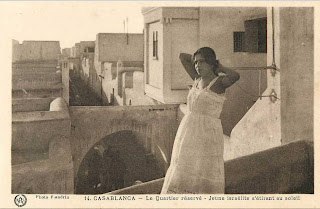 This women may be wearing some kind of ethnic trousers under her skirt or European drawers. The photographer wanted to see them. 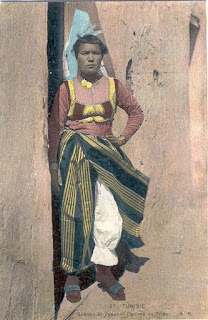 The woman on the left definitely has European style under drawers with her ethnic chemise worn tucked inside. Maybe the photo was taken as a joke. It's dated 1905. 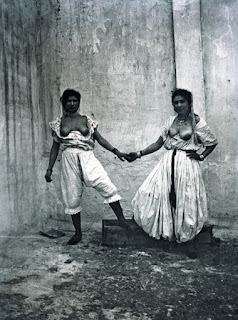 You folks that war game the Sudan, North Africa (Foreign Legion) , and the Boer War might find these entry of interest.

Lastly European styles did go to Australia and you can see the photo of European underwear being worn by the mate of this Australian, Norman Lindsay. 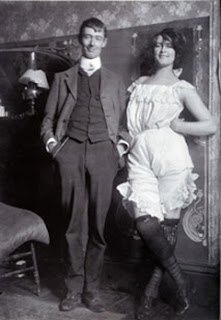 Mrs. Lindsay, ( Rose Soady,)  was an artist's model and a good sport.