Linda Crystal in The Alamo

Ms. Crystal portrayed a fictional character for Davy Crockett (fictionalized by John Wayne) to have some kind of "love interest" in the film. The real Crockett was about 50 at the time but I can tell you that being that age doesn't kill romance. So Wayne /Crockett takes Crystal/Flaca (Graciela Carmela Maria 'Flaca' de Lopez y Vejar) down to the river to say goodbye. Does he romance her? Kiss her? Nope! He delivers a "small r" republican speech to her!

"Republic. I like the sound of the word. It means people can live free, talk free, go or come, buy or sell, be drunk or sober, however they choose. Some words give you a feeling. Republic is one of those words that makes me tight in the throat - the same tightness a man gets when his baby takes his first step or his first baby shaves and makes his first sound as a man. Some words can give you a feeling that makes your heart warm. Republic is one of those words."
I won't get into that the "Texians" were double crossing the Mexican government's plan to let the American's settle in Texas AND carving out a future slave state for the US of A.
Also...If you think that "John Wayne never had to push "1" for English" remember that three of his wives were from Latin America.
Ms. Crystal looked GREAT in a1960 version of what Americans thought upper class Mexican women wore. 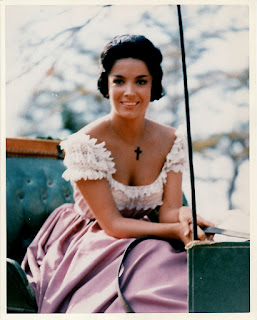 There were sources for the actual costumes. Carl Nebel’s Voyage Pittoresque et Archéologique actually from 1835 1836. 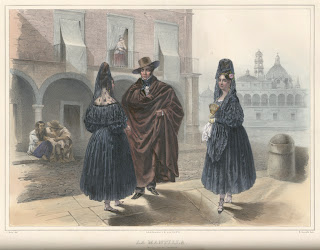 Now we know from period sources what the corsetry and underwear looked like in the 1830s. 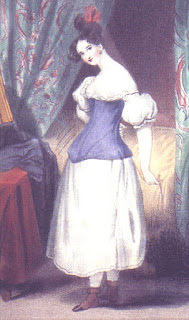 But since Linda Crystal's outfit was a costume, here's what the wardrobe dept. did. 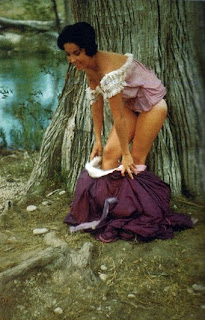 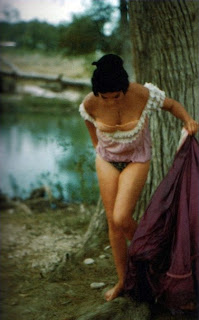 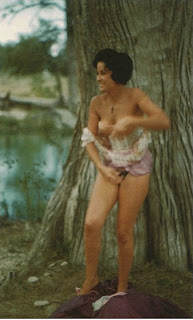 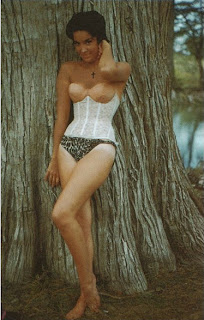 Linda Crystal was already a pinup model, an actress, and it looks like a "good sport" in showing the Hollywood wardrobe dept. way of faking corsetry using a 1960s "Merry Widow" and flesh colored material to soften the shape of the cups.

These photos are out there on the "internets" on a French western movie fan forum. So go watch Johm Wayne's THE ALAMO. It's fun and well made and as good a version as any out there of the story.

Also, try not to think of Linda Crystal in leopard print briefs.