I found this 18th century painting on-line from an unknown German artist. It's a female version of William Hogarth's "A Midnight Modern Conversation" shown below..

Several people on-line at an American War of Independence forum believe that this is a party of female mourners with the widow in black to the left. 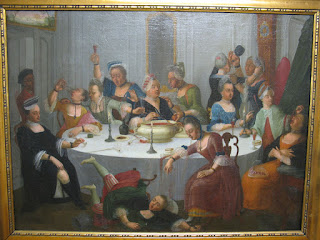 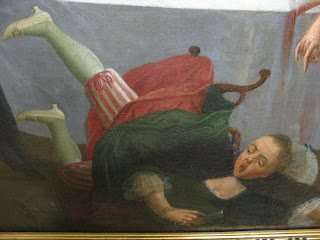 The woman falling above MAY be a man in disguise wearing breeches but this style doesn't match breeches styles. This painting may show the falling woman exposing underdrawers a century before they were popularly worn in Europe. Note that no chemise is showing and may also show that the chemise was worn next to the skin under the drawers as is shown in mid 1800s to early 1900s photos and artwork.

Also note that the widow wears no underdrawers.