Women of the Paris Commune

A number of period images show women in combat during the short history of the Paris Commune. A number of photos and images of Cantinieres can be found. The women actually armed, uniformed and fighting can be seen as well. Some may be imaginary as scenes of combat at the end. The one below is from the London Penny Illustrated June 17, 1871 and may be more allegory than fact. 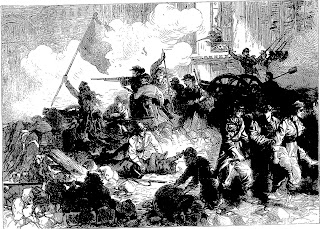 This one shows fighting in Place Blanche with women in skirts and possibly trousers. 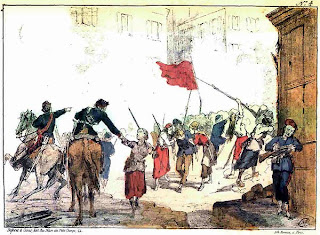 The next three were done by noted illustrator Daniel Urrabieta Vierge of armed women in uniform at the Hôtel de Ville.

PARIS AMAZONS AND CHILDREN AMONG THE PRISONERS.  Paris Correspondence of the London News.
" Among the prisoners marched into Versailles were a company of the Amazons of the Seine, and a battalion of patriotic children. The former were dressed as vivandieres. Some, who had shown themselves restive, were handcuffed. One had a child slung on her back. The arm of another was in a sling. The habit-shirt of another pretty brunette was covered with fresh blood. Another Amazon was

wounded. They all showed symptoms of fatigue, but still wore a defiant air, and did not seem to belong to the class with which the Magdalen Asylums are peopled. All were not young; indeed, matrons were more numerous than maidens in this band of female warriors. They were forced to walk at a quick pace under the broiling sun,  by a troop of mounted gendarmes. Their advent in the streets of Versailles was the  cause of mirth among the people. One stout old woman, who responded to the smiles of the bystanders by disrespectful pantomime, was hailed as Mere Duchesne. In one detachment of 200 National Guards, ten of them were children not twelve years old. The young patriots seemed to feel that the eyes of Europe were upon them, and pose accordingly. They wore the uniforms of the National Guards...."
Posted by Scott B. Lesch at 4:35 PM