Rachel had a scare with her heart yesterday so we went into Boston Children's Hospital this morning. She was fine (Thank Science!) so we swung by The Hobby Bunker on the way home.

I picked up a box of these new figures and most are pretty good. The authenticity problem for me is that the sculptor put barrel band on muskets and rifles that historically didn't have them. (See the red crossed below.)  Several figures have poorly molded flintlock mechanisms. (See the red stars below.)
The clothing is suggested by Bicentennial Costume but generally correct. There are no buckskins and no hunting shirts on the figures which IS good for New England militia. The lack of coats on several figures make them good for Bunker Hill in June not just than Lexington and Concord in mid April.
What you get in the box are two copies of eight individuals rather than uniform troops and generic fighting poses. Three of the poses don't bear many multiples on the table.
The figures I saw come in a blue gray (Nice) and an icky greenish tan.  A good soak in hot water straightens them out like most boxed plastic figures.
I generally like these figures and they could provide conversion possibilities to make more individuals. Collectors can easily use the figures for French and Indian War and Rev-War battles and they do fit with other brands. 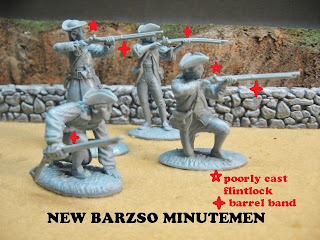 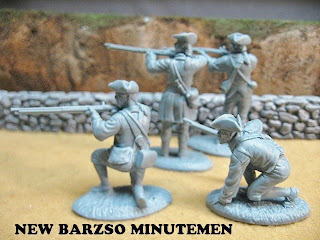 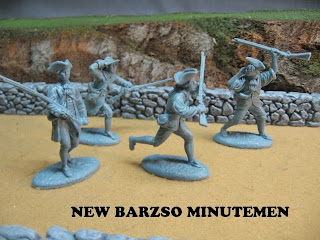 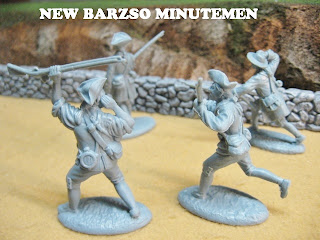 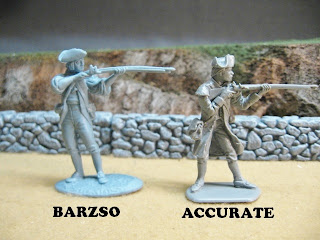 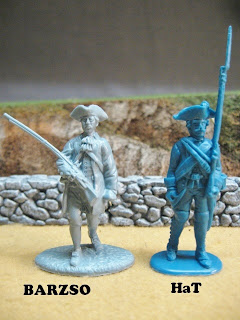 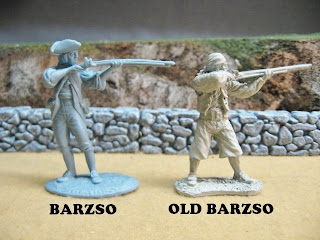